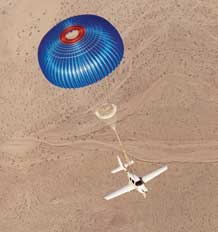 Cirrus CAPS parachute credited with another 2 saved lives. The chute deployed and they descended into the Atlantic Ocean. The airplane quickly began to fill with water.

What would YOU do? Get with your Cirrus CSIP instructor soon to practice emergency scenarios.

(if you can’t see the video, use Chrome or FireFox. It doesn’t seem to load correctly in IE.)

The full story from ABC:

After surviving a harrowing plane crash off a sparsely populated Bahamas island – during which their lives were saved by the deployment of a giant parachute — a father and daughter from Alabama are continuing on with their medical mission to Haiti.

59-year-old Dr. Richard McGlaughlin and his 25-year-old daughter, Elaine McGlaughlin, departed from their home near Birmingham, Ala., on Saturday for a planned stop in Miami, before continuing on to Haiti.

Just one hour after the pair took off from Miami, however, trouble struck in their small plane.

The oil pressure plummeted, forcing Dr. McGlaughlin, the pilot, to send a distress signal to Coast Guard officials that their single-engine jet was going down.
Quickly coming to their aid were two Coast Guard lieutenants, who happened to be on a cargo mission nearby and raced to the plane’s location, just off the coast of Andros Island in the Bahamas. The Coast Guard also deployed a HC-144 Ocean Sentry fixed-wing aircraft from Miami to find the McGlaughlin’s airplane.

The oil pressure malfunction caused the plane’s single engine to seize up. After mayday calls, the father and daughter could only watch.

“The most frightening thing for me was seeing the propeller frozen, motionless, in front of a plane that’s in the air,” Elaine McGlaughlin said.

Once the two hit the water, they faced the risk of drowning as the water in the plane rose around them.

“The plane filled up with water quickly, and that was sort of scary too because the doors are all closed but it just comes in the vents, and right away you are waist-deep,” said Dr. McGlaughlin.

The doctor and his daughter managed to make it out onto one of the plane’s wings, and then into an emergency inflatable raft stored on the plane.
Minutes later, an MH-60 Jayhawk helicopter deployed from Clearwater by the Coast Guard began to circle overhead.

The pair were then flown to Odyssey Airport in Nassau, Bahamas, where Dr. McGlaughlin’s passion for his work in Haiti, devastated by earthquake two years ago, became evident.

“Am I doing to do it again? As soon as I get another airplane. Yes, oh, yeah,” said the doctor.
McGlaughlin and his daughter departed at 8:30am Monday morning on a commercial flight to Haiti.